Well, at least the GOP has finally just come out and admitted that they only want white conservatives to vote and anybody else voting must be cheating. I’m referring, of course to Georgia’s shiny new law that restricts voting rights and fair voting practices to the extent they believe possible. I THINK it’s called the ‘Fuck You America, WE Choose Which White People Get To Vote Act’ but that may not be exactly right. The cons are all on board and all very happy they don’t have to have any more fair and honest “elections” in Georgia, thank you very much. That one was more than enough. Georgia Governor Brian Kemp (R, of course) – who did NOT exactly gain his current position by presiding over a fair and honest “election” – said as he signed the bill, “After the November election last year, I knew, like so many of you, that significant reforms to our state elections were needed.” (They weren’t.)

Not ALL Georgians were on board, of course. 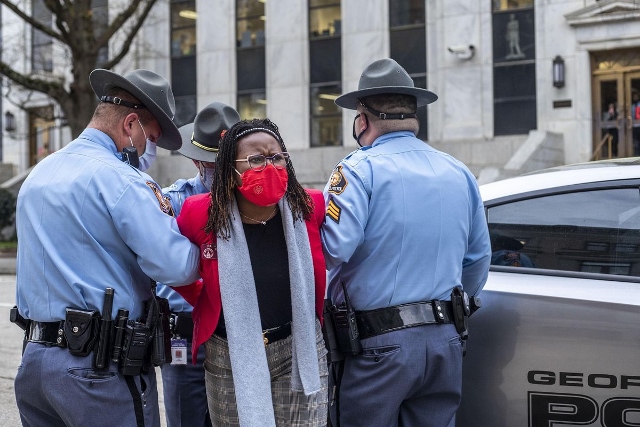 This is Georgia State Representative Park Cannon (D -Atlanta) being arrested for knocking on Governor Kemp’s door while he was announcing the official GOP return to Jim Crow.

I presume the ACLU had to let the racist, cheating GOP in Georgia pass their racist, cheating bill and then have their racist, cheating Governor sign the damned thing into “law” before they could challenge the vile action in court. The thing is, the Constitution gives states broad control over how “elections” are conducted in the individual states so without the help of the Federal government’s HR 1, ‘The For The People Act of 2021,’ there’s a chance the Sour Cream Court might uphold the latest “revisions” of democracy. Call your Congress critter in the Senate at (202) 224-3121 and tell them to support HR 1. The Heritage Foundation opposes it so, as a thinking person, you can take comfort that it’s a good thing…

It always startles me a bit to watch the way the conservative mind “works.” First, they lie and lie and lie about something until they believe it. THEN, once they believe their own lies, they decide to “take action.” Then, they DO take action and call it a job well done. It’s important to note that there is NO evidence supporting the pretense of widespread cheating in the 2020 “election.” None. In fact, when cons come out and claim the left is cheating you can bet your bottom dollar the right is cheating – or trying to. There’s a rule of thumb that became a general guideline that is now very close to becoming an axiom. The conservatives are ALWAYS doing what they accuse their opposition of doing. (Remember that the next time you hear some con spewing the Q-Anonsense about pedophile rings…)

If you will recall, Georgia and other cheating GOP states are revising democracy because of their recent discovery that fair elections might go against them. After Donnie the Dumbass couldn’t get the Republican Secretary of State Brad Raffensberger to simply declare an alternate winner via trumpery, Georgia cons realized they needed to change things so they COULD, “legally,” simply declare their preferred candidate the “winner.” It seems so… simple. Hell, why even have the voting at all? What a waste of time.

As everybody now knows, the Dumbass then went on a rampage of b.s. and sent out his minions to insist that widespread voter fraud DID happen. They KNOW it. Sure, they can’t prove it and no evidence exists – but they know it anyway. It was the machines, they said. One of the manufactures of said machines, Dominion Voting Systems has responded to charges of widespread vote manipulation by their machines by filing HUGE lawsuits against the purveyors of the mendacity. The first one I heard about was filed against trump lawyer/not trump lawyer Sydney Powell in the amount of $1.3 BILLION dollars. Truth? I laughed out loud. What fun, seeing the chickens coming home to roost. Then they filed against famous fraudster Rudy Giuliani in the amount of $1.6 BILLION dollars. They’ve filed several more since then, most recently (as of this writing) against FOX “News” itself, also in the amount of 1.6 Billion dollars. Suddenly, though, as guilty as I think the defendants are in their deceptions, I’ve stumbled across a…concern.

As I said, I thought it was funny as hell Powell was about to “get hers” as the saying goes. She lied and lied and lied and the company she was lying about took action. Good. (By the way, I predict she’s going to lose. Her response is pathetic. ‘No reasonable person would have taken her seriously?’ Seriously? Cons DID take her seriously. Some attacked the Capitol. Some are passing laws to prevent future voting fraud like that which never happened in the first place.)

But…$1.3 BILLION dollars? Do they have any reasonable basis for believing that she could pay when she loses? CAN Dominion be damaged $1.3 Billion dollars worth? I need the help of my legal peeps on this one but I believe there is a legal concept of a punitive lawsuit designed and intended not to redress a wrong but, instead, to prevent any future criticism of the company, and it’s starting to feel like Dominion is doing exactly that.

Sorry…numbers. Dominion has filed against Powell for $1.3 billion, Giuliani for $1.6 billion, crappy pillow maker Mike Lindell for $1.3 billion, and now Fox “News” for $1.6 billion. That’s $5.8 BILLION dollars in “damages” for a company with annual revenues of – according to Dominion themselves – only $36.5 million in annual sales (per Forbes). According to the Penn Wharton Public Policy Initiative estimates, the number could be as high as $100 million dollars. It’s a private company. Numbers are hard to come by, but even using the higher number, Dominion is trying to “recover” 56 YEARS worth of revenues from the four? That seems…excessive…

Again, trusting that my legal peeps will let me know if I’m wrong about this, my suggestion would be for the defendants (all of whom I believe are guilty as charged) to subpoena the code for the machines. ALL of the voting machine companies are notoriously protective of their software. “Proprietary,” they call it. They don’t want ANYBODY to see their code under ANY conditions. But the code is the very heart of the question, right? The hardware doesn’t do ANYTHING without the software. Powell, et al, should NOT have made the charge without access to the software but now certainly cannot defend themselves against the punitive suits without access to the software – so that’s where I’d go.

Dominion might well stand down if they have to turn over their proprietary software – especially since said software might well end up being exposed to the world with only some low-level staffer blamed for the “mistake”, fired, and then quietly hired back in some new capacity…

I’ll tell you this; I really don’t want rich and powerful companies to be able to squelch dissent by simply filing a lawsuit destined to destroy – even when I agree with the principle behind the suit…