Facebook, in particular, uses Section 230 to protect itself from the various “editorial decisions” it makes. So, when Facebook allows hundreds of pages where users encourage each other to defile the US Congress in an act of treason, for example, Facebook is protected because they didn’t create the content – and they claim to “police” said content…you know, eventually. All in keeping with Section 230. For all the good it will do in our once-great nation, I call “bunk!”

One of the things we all know, on some level, is that Facebook uses an algorithm to sort-of push certain information it certainly did not create to users who prefer that information. But they don’t push ALL of the information on a given subject. They only push what they think that user wants to hear. I argue that selecting only certain information to provide certain individuals IS “creating” content.

Think of it this way: let’s say I start with a public domain photo of Mitch “the bitch” McConnell. I put text over the bitch’s head that reads “Workers of the world, unite!” leaving the impression that McConnell is now embracing the Communist Manifesto. I didn’t “create” ANY of that content. I simply made “editorial decisions” about what should be placed where. But in doing so, I created a false impression of how ‘Moscow Mitch’ views Communism.

I submit that Facebook’s algorithm is doing the same thing, creating content by selectively distributing content and in creating content, they surrender their protective “publisher” standing. If my algorithm feeds – to you – a user claim that Dems eat babies but NEVER feeds to you the user rebuttals that Dems don’t eat babies, I’ve created the seemingly unchallenged idea, at least in your mind, that Dems eat babies. Fox “News” is infamous for the same kind of created content and anyone, everyone, except a Fox “News” viewer knows the crap being spewed on that station is propaganda, not “news.” Apparently, according to people who track these things, Fox has spent a total of 88 seconds talking about Sean Hannity’s involvement in the dumbass’s insurrection. When Hannity is called before the investigating committee, Fox viewers are, actually and honestly, not going to understand why they would call him. I would call that “content creation through omission” and I believe Facebook’s algorithm does the exact same thing…

My position is that so long as Facebook is using an algorithm to selectively push information, they should NOT enjoy the protections of Section 230 since they ARE, in fact, creating content. Let the regulating – and lawsuits – commence…please… 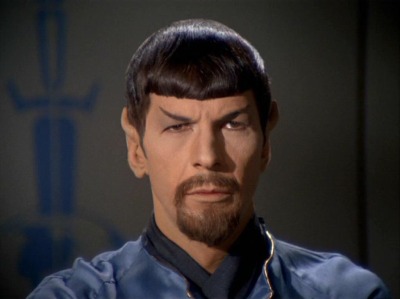 There’s an episode of the original ‘Star Trek’ called “Mirror, Mirror.” (Many people simply refer to that episode as “Spock with a beard.”) In it, four members of our good-guy crew get caught up in some science-fiction anomaly and switch places with the same four members of a barbarian Enterprise in an alternate dimension. In the alternate dimension, our good-guy four are able to pass themselves off as the barbarian four – for awhile. (Coincidentally, just long enough to figure out what happened, recreate the anomaly, and get the hell out of there…with the bearded Spock’s help. Roll credits…)

Every once in awhile, I see a letter to the editor in which the writer tries to pretend he’s a liberal who has just had it with liberal politics and so is going conservative. The letters start out, ‘I used to be a liberal but…” or “I’ve voted Democrat all my life but no more!” Then the letters go on to defend their choice to switch by parroting conservative talking points. ‘I used to be a Democrat but when I found out, for sure, that Democrats eat babies I just had to throw my support to Donald Trump and you should too…’

I usually laugh. I suspect these writers see themselves as clever sods who are pulling off some mighty deception and fooling lefties into turning into righties but they ALWAYS devolve into conservative talking points that bear no resemblance to reality and exist only in the conservative delusional bubble. (That would be pretty much any and ALL of their talking points…)

In the episode, “Mirror, Mirror,” the barbarian four are almost immediately discovered and detained. The ease of their capture is explained in the show by pointing out that as civilized people, it was FAR easier for the good-guy four to pretend to be barbarians than it was for the barbarian four to pretend to be civilized. We, the people of this once-great nation, can see the same dynamic playing out whenever we see the extremist cons attacking the Congress (or defending the insurrrection), perpetuating the big lie, or even just driving past an anti-mask/anti-vax protest. The extremist cons simply aren’t capable of behaving like civilized people…