YOYO
By now, we all understand the traitor Trump’s failed strategy for dealing with Covid-19: ignore it.  Now, there’s information that the White House has unified it’s message into ‘We’re going to have to learn to live with it.’  I see the message as “Screw you.  You’re on your own.”  We are, too.  Since the White House has abandoned it’s proper leadership role in this matter, we’re just left to fend for ourselves.

This is the small government, leave-it-to-the-states approach conservatives think they’d enjoy.  This is what it looks like.  One state makes a good decision based on science and it’s neighbor makes a different, poor choice based on some guy’s gut feeling.  The science state ends up losing to the gut feeling state anyway because viruses don’t give a fig about your politics…or mine.

Decent leadership would have been nice during this time, though…

It’s the economy, stupid!
The truth is, Trump thinks he’s going to revive the economy and that (and his Russian buddies) will get him re-elected.  So he chose to ignore Covid-19 and try to force the workers back into the fray – an acknowledgment that workers, not the so-called “job creators,” are the life-blood of the economy.

Forcing people back to work has had two predictable results.  One, the June Jobs Report looked, comparatively, fairly good.  Two, Covid-19 infections have shot through the roof.  States that were trying to “reopen” are now starting to “reclose.”  I’m guessing the July Jobs Report won’t be so rosy…

For now, the deniers will point out (they’d better hurry, though) that deaths have not spiked.  Deaths always follow the infection rate.  The why is simple: more people start showing up at hospitals.  At first, the hospitals are able to care for the sick but before too long, the number of sick begins to overwhelm the capacity of the hospitals and the facilities have to go into triage mode – that means picking and choosing who gets care and who dies.  THAT’S when you’ll see the death rates spike.

And in the meantime, the economy is going back into limp-along mode.  Trump’s self-absorption is killing Americans…

Amnesty
I think we on the left need to offer a short period of amnesty to trumpsters who would rather NOT be tarred with the stain of racism so closely associated with Trump.  By now, the evidence of Trump’s racism is so clear only the willfully ignorant could pretend they don’t see it (Keyword: pretend).  I even take into account how the conservative media constantly scrubs and white-washes (heavy emphasis on the ‘white’) Trump’s image.

But the mountain of evidence is undeniable.  As nearly as I can tell, Trump’s entire campaign strategy for 2020 consists of reaching out directly to racists with his “comforting” message of being one of them.  I think most people accept the idea that one can judge a man by the company he keeps.  (That’s a one-way street, in this case.  Trump’s acolytes might like to “keep company” with him but there’s no way in hell he would hang around with any of them.)  Trump keeps reaching out to white supremacists.  THOSE are his people.  THOSE are the ones he’s counting on for re-election.

That means we’ve come to a crossroads.  Look, you likely don’t see yourself as a racist.  Most racists don’t.  Maybe you really aren’t.  But how can you be okay with racism unless you feel it a bit yourself?  Perhaps your loyalty to Trump was based on other aspects of his policies.  Whatever.  You’re about to be stained forever by your association with the racist Trump. 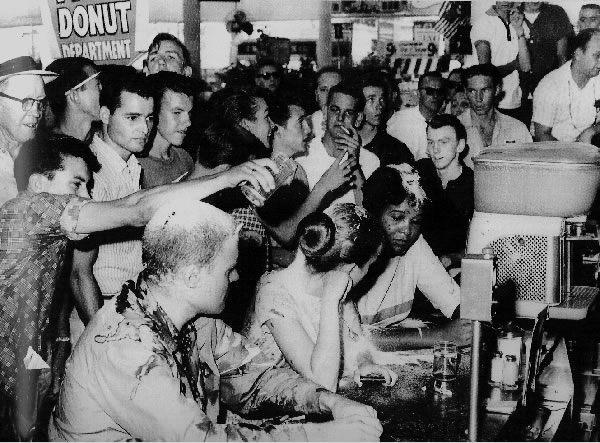 Look at the thugs in this photo.  I’m particularly struck by the guy on the left, just to the right of the guy pouring sugar on the woman.  He’s just staring.  He’s not actively participating but he’s not doing anything to stop it, either.  He’s with the mob.  He allowed himself to be in the photo standing against equality.  He will forever be associated with this hateful little event because of where he chose to be in that moment.  And if you’re a trumpster, he’s you.

So…as a one-time good deal, I offer a short period of amnesty in which any and all heretofore trumpsters can publicly disassociate themselves with the Orange Disaster, and I’ll believe you and accept what you say.  How about, one week?  After that, I’ll know you’re at least…okay with racism.  Even if I don’t say so directly, I’ll understand you as a racist from here on out.  Fair warning: your association with Trump is about to become an entry on your permanent record, one you can’t erase…

…and we haven’t even started on his treason, yet…