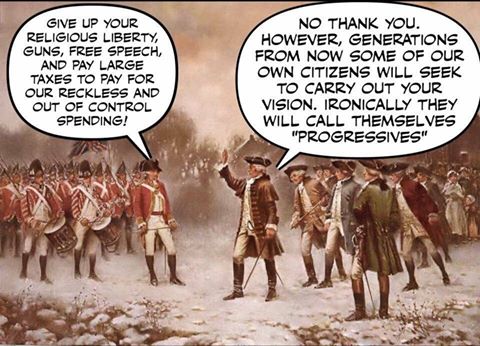 Recently, I’ve been giving a lot of thought to this “freedom” my conservative brethren are always on about.  I’m not sure I know – hell, I’m not sure THEY know – exactly what it is they’re referring to.  Then I see the above meme.  It’s AWESOME as a piece of political propaganda but has little or nothing to do with reality.

I’m a progressive.  I think this means I’m at liberty to speak for all progressives everywhere on every topic that might come up.  So, speaking for every progressive in the history of progressives, I can say with 100% certainty that nobody is asking anybody to give up their “religious liberty, guns, and free speech” and I feel certain that, on the subject of taxes, progressives would simply prefer that the very super-duper, hyper-wealthy participate in our society at the same rate as they extract from our society.

Look, I don’t care which invisible super-friend you choose to “worship”.  I just don’t want you making actual rules in real-life based on your delus…er…”beliefs.”  I don’t care if YOU have a gun.  I would just like to find a way to keep them out of the hands of crazy, stupid, and/or irresponsible people.  “Free speech”?  Wait a minute…wasn’t it conservative George W. Bush who introduced the concept of “Free Speech Zones”, thereby implying that there are places in America that may not be eligible for free speech?

I’d like some help from my conservative friends out there.  What IS the “freedom” you seek?  Are you looking for the “Jeremiah Johnson, mountain man” freedom where you do exactly what you want, when you want?  That doesn’t exist.  It didn’t even exist for him.  Even mountain men had rules of acceptable behavior.  The issue becomes much more clear when one considers this question: What about when the OTHER “mountain man” exercises HIS “freedom” to do what HE wants all over YOUR “freedom” to do what YOU want?

There’s an old adage out there that says that your freedom to swing your fist ends at the tip of my nose.  It’s a metaphor, although I submit that it’s quite literally true, as well.  Basically, it means you really can do pretty much what you want – until it interferes with someone else’s ability to do what they want.  (And vice-versa, of course.  It’s not “aimed” at conservatives…)  Don’t we, the people need an arbiter?  I know conservatives support the court system but are you REALLY saying that the same (or similar) conflicts should be litigated over and over and over again?  Jeez, talk about frivolous lawsuits…

Setting aside the fairly recent trend of special interests buying protective legislation, most rules and – dare I say – regulations are about balancing the “freedoms” of one individual or group against the “freedoms” of another.  There are so freaking many of us, it can sometimes be a tricky situation.  Of course “the arbiter” doesn’t always get it right or sometimes conditions change.

I’ll tell you this: If the “freedom” you demand is the “freedom” to prey on society, I’m not on board and I never will be on board.  So, please…tell me.  I’m asking because I want to know.  What, exactly, does this “freedom” you seek look like?