There’s a thing happening on the left. People are starting to refer to Joe Biden as ‘Dark Brandon.’ I like it. If you missed it, there was an interview going on at a racing event in which the winner – a guy named Brandon – was being interviewed. Conservatives, being the way they are, took the opportunity to embarrass themselves on national television by shouting “Fuck Joe Biden” loudly enough to be heard by the microphones. The interviewer tried to cover the invective by pretending the crowd was shouting “Let’s go, Brandon.” They weren’t. In conservative world, Joe Biden became “Brandon” and a right-wing “smear” was born. (Truth? I never understood the “smear” of not knowing someone’s name…)

Recently, Biden has been pushing back against right-wing crazies who show up at his speeches just to try to heckle him. He’s taken to offering zingers that allow him to attack conservative ideology in general. In the past, he has stuck to less aggressive comments like, “They’re entitled to be outrageous, this is a democracy.” In the most recent go-round, though, he upped the ante a bit. During a speech in Milwaukee, some con heckler started in. Security starting moving toward the miscreant but Biden said, “Let him go. Look, everyone’s entitled to be an idiot.”

The man was tossed out anyway but the crowd loves Biden’s rhetoric. I do, too. As this has happened more and more, the left is taking back the “Brandon” slur by calling Biden “Dark Brandon” and Dark Brandon seems to be embracing the moniker. Biden is out giving speeches denouncing authoritarianism and autocracy and talking up democracy. He’s attacking some of the basic tenets of extreme conservatism and I say, it’s about time. I, for one, have had enough.

When Ronald Reagan first introduced the fraudulent concept known as “Supply Side Economics,” more commonly known as “trickle down economics,” I thought it didn’t make any sense. So did another candidate in the 1980 election, Reagan’s eventual Vice-President, George Bush (this would be Bush 41), who coined the term “voo-doo economics.” If your party is your faith, you STILL likely believe that Reagan was some kind of sage but based on evidence and reality, Reagan was a blithering idiot and Bush 41 and I were right. I know…words and numbers can be boring so I’ve got some pictures!

I didn’t make them. Some group out there – the ‘Center on Budget and Policy Priorities’ made them. They took something like 75 years worth of economic data comparing economic outcomes between countries. They put Reagan’s face to show when Reagan started HIS big lie and then let the actual data tell the rest of the story. It’s quite enlightening. For example, one showed economic gains between the “classes” of the United States through the years. 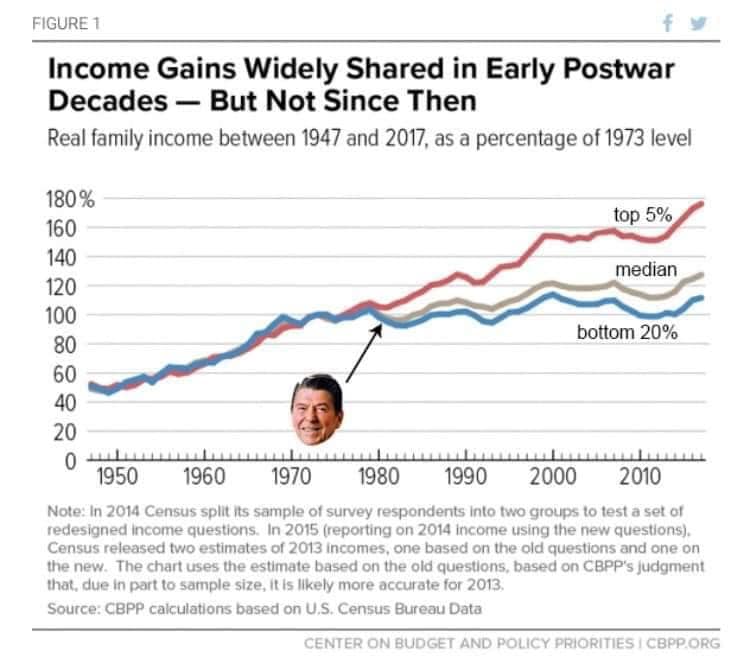 See Reagan’s face and the arrow? That’s when Reagan was elected. See how the lines run roughly together before Reagan and diverge more and more dramatically after Reagan? THAT is the direct result of trickle down economics, a conservative policy. Oh, but wait, there’s more: 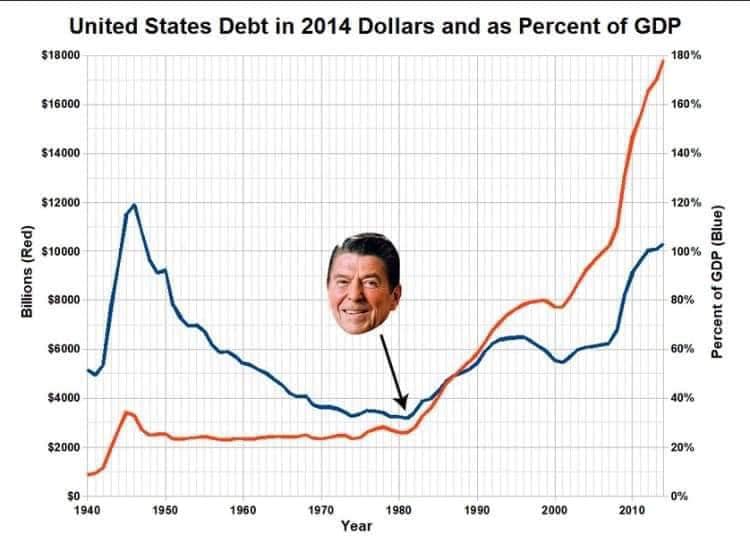 In this one, the blue line is the National Debt and the red line is the debt’s percentage of the nation’s Gross Domestic Product. The national debt was declining steadily – until Reagan. Now it’s a conservative talking point and a concern for everyone, thinking and non-thinking alike. Even the conservatives, rank and file, anyway, don’t like the results of their own policies so they’re always on about how terrible is the national debt but oppose the necessary steps to correct the problem, taxing the wealthy.

I like this one. It’s sort of a close up of the public debt as a percentage of GDP. ANYONE can see how the debt has skyrocketed since Reagan. Cons, though, will close their eyes and refuse to look. But the rest of us really ought to know. 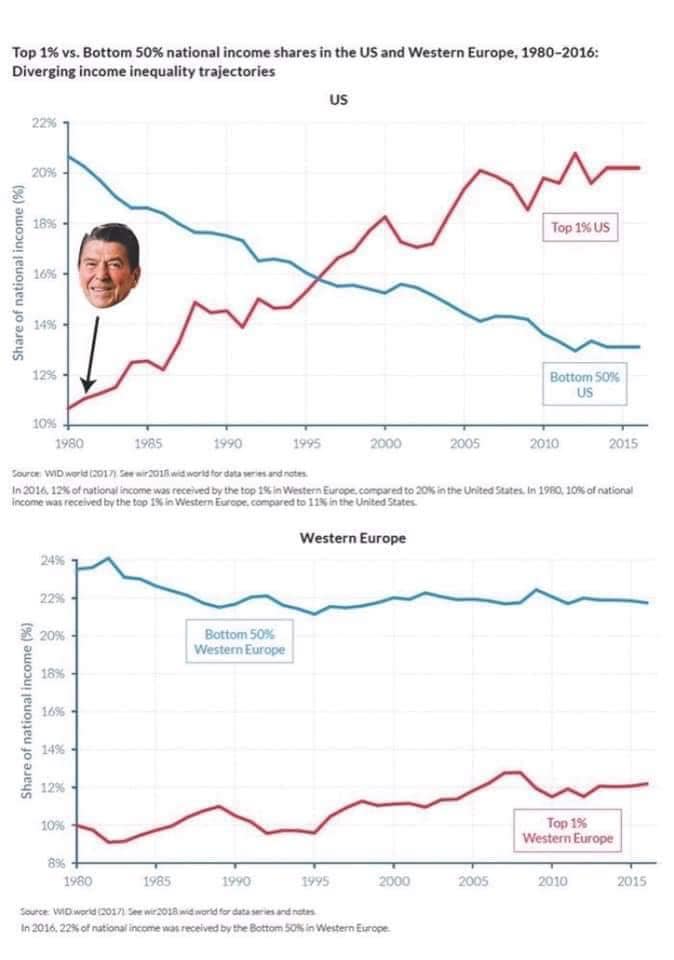 This one shows the increase and decrease in the share of national income between the 1% vs the bottom 50%, both in the US and Europe. The Western European model seems to be better for the largest number of people, yes? Based on data, of course, yes. The self-deluded will STILL shout “NO!” They’ll still be wrong, though. Okay, one more: 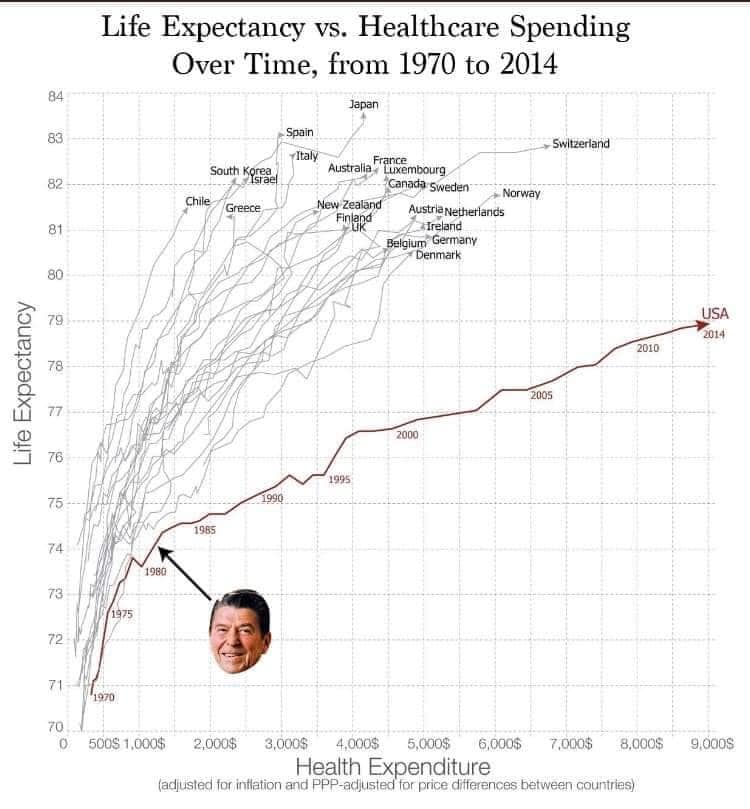 This one is a bit different, a bit more personal. This one shows life expectancy vs healthcare spending over time between the once-great United States and the first world nations that offer national health care in one form or another. One little line shows that US health care costs more than anywhere (thanks to Capitalists) with a far worse outcome. All that “Ain’t US health care the best in the world?” No, apparently not. Oh, sure, you’ve got a slogan but you don’t have decent health care.

So…have YOU had enough, too?